The fictional story of Sweeney Todd, the London barber who kills his victims and makes them into pies with his accomplice Mrs Lovett, has captivated audiences for almost two hundred years. While numerous films ensure Todd’s tale remains in the popular imagination, where did his story originate?

In 1846-7 the British “hack writer” Thomas Preskett Prest first introduced Sweeney Todd’s story in his eighteen part ‘penny dreadful’: The String of Pearls: a romance. ‘Penny dreadfuls’ were hugely popular in the 19th century, and were cheap sensational tales full of shocking murders and crime. The String of Pearls opens with a detailed description of Sweeney Todd’s barber shop, establishing its location in Fleet Street and its proximity to St Dunstan’s Church. This close proximity sets up tensions between morality and immorality, a theme explored throughout the novel, with the two buildings an unsettling symbol of the co-existence of the two. Preskett Prest’s initial description of Todd emphasises his demonic temperament. The name “Sweeney” is described as “a Christian appellation”,  and his laugh a sound “scarcely possible […] [to have proceeded] from mortal lips”.  Even Todd’s physical appearance is suitably grotesque “the barber himself was a long, low-jointed, ill-put together sort of fellow”.

Apart from Todd’s murderous barber shop activities, there is another story that weaves throughout The String of Pearls, a tale of romance between lovers Mark Ingestrie and Johanna Oakley. After Mark fails to return from his sailing expedition, Johanna decides to uncover the truth behind his disappearance, a truth that leads to Sweeney Todd’s barber shop. The weaving of the two plots does come together in an almost too opportune manner; however, it is easy to see why this story with its emphasis on gruesome murders was one of the most successful “penny dreadfuls” of the period.

Mrs Lovett’s pie shop plays a crucial part in the novel. Located on Bell Yard, a street just off Fleet Street, Todd and Mrs Lovett utilise the subterranean network of vaults connecting their premises via St Dunstan’s Church, to carry out their sadistic crimes. Again, Preskett Prest troubles the opposition between morality and immorality , describing the throng of lawyers from the surrounding law courts queuing to devour Mrs Lovett’s pies. The bodily description of lawyers, upholders of morality, unknowingly gorging themselves on the flesh-filled contents of Mrs Lovett’s pies, is unsettling.

While the murderous activities of Sweeney Todd are the parts of the tale that remain with us, there are plenty of themes to discover in The String of Pearls. Todd’s unsuccessful attempts to elevate his social standing, and the fact that all his victims are wealthy, acts as a powerful commentary regarding the societal oppositions and divisions within the English class system. In the familiar setting of a barber’s shop, in the everyday world of London, Sweeney Todd’s shocking story of gruesome murders and cannibalism have ensured his continued appeal.

How to get here

The nearest underground station to Fleet Street is Blackfriars (about a 10 minute walk). St Paul’s Cathedral is also a short walk away. 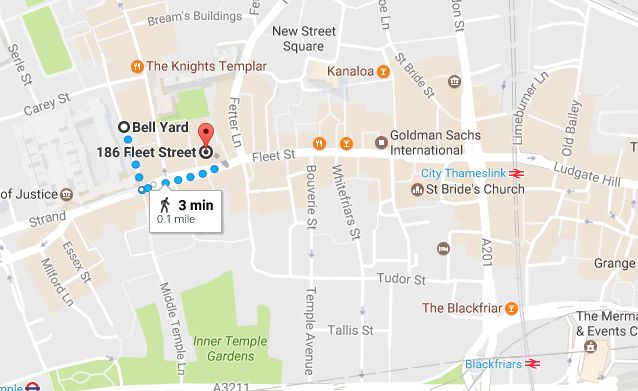 2 thoughts on “Sweeney Todd and The String of Pearls”