In 970 AD, one of the UK’s greatest literary treasures was written: the Exeter Book. It is probably the oldest surviving book of poetry from Anglo-Saxon England, and contains a fascinating array of Old English works, from Christian and elegaic poems, to riddles! The book was bequeathed to Exeter Cathedral Library by the first bishop of Exeter, Bishop Leofric, before his death in 1072, and still remains there to this day.

One of the first things you’ll notice about the manuscript is the clarity of the ink, which is written in a square Anglo-Saxon hand. The Exeter Book is thought to have been written by a single scribe in a monastic scriptorium in the south-west of England. However, because of the relatively inferior quality of the parchment, and the manuscript’s lack of ornamentation, it is believed that the scriptorium was not particularly wealthy.

The sheer wealth of genres contained in the Exeter Book make it one of the most significant volumes of Anglo-Saxon literature. Containing over thirty poetic texts and more than ninety riddles, there are plenty of works to discover. Below are some of the works you can find within the manuscript:

Widsith- This is a famous example of catalogue poetry, and focuses on Widsith’s travels as a scop (Anglo-Saxon poet). Widsith stresses the important role the poet played in preserving the exploits of legendary figures; however, the poem also reinforces Widsith’s status as a marginalised figure, wandering as an exile. Throughout the poem, great emphasis is placed on amassing material wealth, and even Widsith’s stories become material objects, “Widsith spoke, unlocked his treasury of words”.

Juliana-  Based on the life of Saint Juliana, the martyr beheaded in Nicomedia between 305 and 311 AD, the poem emphasises Juliana’s role as a Christian hero, serving and promoting God and his teachings. Unlike the glory driven battles of Beowulf, Juliana’s battles are insular and spiritual, highlighted by her fight against the devil. Against the descriptions of Juliana’s private heroism, the poem emphasises the physical bodily violence that Juliana has to endure because of her beliefs, tapping into wider discourses surrounding the violation of the female body.

The Wanderer- The Wanderer is an intense meditation on earthly transience, describing the narrator’s exiled state as a result of his lord’s death. The juxtaposition of the loss of the narrator’s worldly values with the permanence of Heaven, emphasises the poem’s transition between the particular and the universal. Indeed, the poem serves to emphasise how individual misfortune forms part of a wider picture on the state of the human condition.

The Wife’s Lament- This poem taps into the gendered nature of exile, describing the anguish experienced by the Wife due to her husband’s imprisonment overseas. Trapped in a cave by her husband’s kinsmen, the poem emphasises how the female body is contained and entrapped by men.

The Exeter Book Riddles- In my Anglo-Saxon Literature Recommendations blog post, I gave an overview of the Exeter Book Riddles and included some of my favourites. The Riddles are one of the most well-known works in the Exeter Book, and they focus on an eclectic mix of themes. Not only do the Riddles reinforce the martial prowess that was so central to Anglo-Saxon society, there are also riddles about Christianity, and the domestic duties of everyday life. Despite being written in a scriptorium, the Riddles are bawdy and witty, and are ever so captivating. 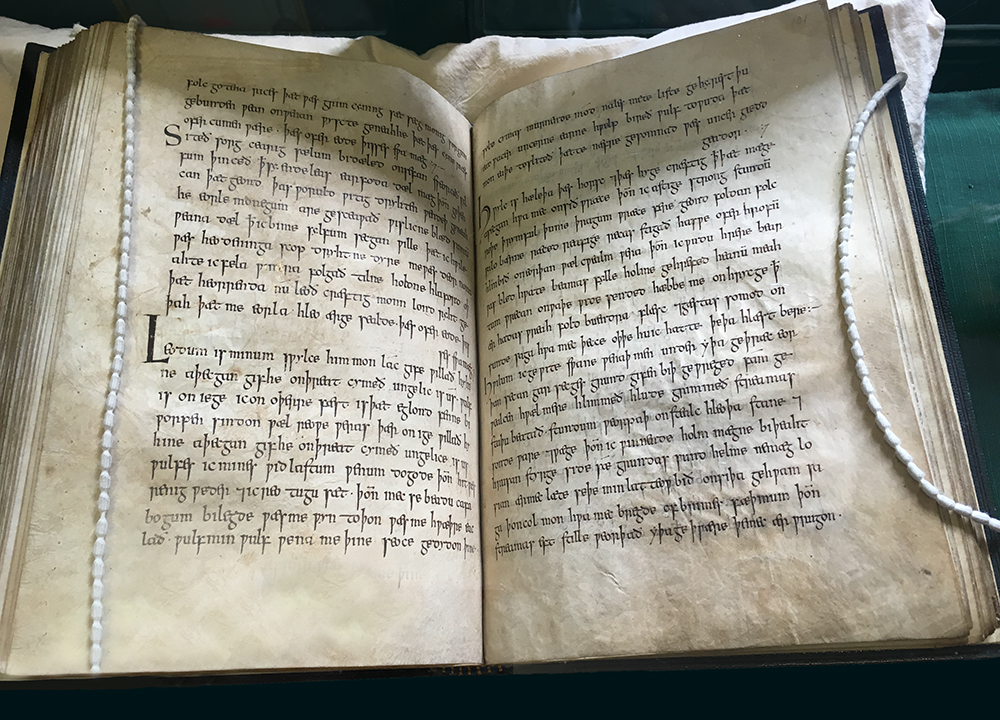 The Exeter Book emphasises the sheer diversity and brilliance of Anglo-Saxon literature, and without it, it is fair to say that our knowledge of Old English would be much narrower. In 2016, The Exeter Book was granted UNESCO Memory of the World status, and was described as “the foundation volume of English literature, one of the world’s principal cultural artefacts”.

If you want to discover some of the Exeter Book’s works, I recommend reading Kevin Crossley-Holland’s The Anglo Saxon World: An Anthology, published by Oxford World’s Classics.  Kevin Crossley-Holland has also published a complete translation of the riddles in his book: The Exeter Book Riddles. The Exeter Book is on display at Exeter Cathedral Library and Archives, and it is available for visitors to see on select days throughout the year, check Exeter Cathedral’s website for viewing dates.

I hope this has encouraged you to learn more about the Exeter Book, and if you have a favourite work from the Book, let me know!

One thought on “An introduction to the Exeter Book”