Just a stone’s throw away from the hustle and bustle of London Victoria is the Royal Horticultural Society’s Lindley Library, an elaborate red-brick building with a rich intellectual heritage. Specialising in botanical art and garden history, the Lindley Library is a horticultural lover’s paradise, and contains a fascinating array of early printed books on gardening, botanical art and photographs. But, some of the Library’s greatest treasures are to be found in its rare books collection.  From 16th century manuscripts to ornate 19th century books, here are some of the delights this collection has to offer.

Complete with brass clasps and corner pieces, this hefty book by the Italian botanist and physician Pietro Andrea Gregorio Mattioli (1501-1577), would not look out of place in the magical world of Hogwarts. The Kreutterbuch is a German translation of Mattioli’s great herbal, De Materia Medica – a Latin text which was inspired by the ancient Greek physician Dioscorides’ eponymous work. Mattioli was regarded as the most successful botanical writer in 16th century Europe, and his work was published in more than 60 editions, in languages including  Latin, Italian, French, German and Czech.

The Kreutterbuch was edited by the German humanist and physician, Joachim Camerarius The Younger  (1534-1598), and contains over 1,000 woodcut images of plants, many of them ornately illustrated.

By the sixteenth century, gardening had exploded in popularity across England, and there was a demand for affordable books on the subject.  One of the leading voices in this market was the astrologer and translator, Thomas Hill, whose work A most brief and pleasaunte treatise, teaching how to dresse, sowe, and set a garden (1563), was regarded as the first gardening book to be published in England.

Just a few years later, Hill published his work The Gardeners Labyrinth (first edition published in 1577), which quickly became a bestseller. This small book contained a wealth of information for the budding gardener,  with advice on ‘the apt times for sowing, setting, planting and watering’ and the medical benefits of herbs, plants and flowers. One of the most captivating aspects of The Gardeners Labyrinth is its detailed illustrations, which range from images of formal gardens to gardeners hard at work.

Widely regarded as a masterpiece, Hortus Floridus was one of the key botanical works of the 17th century, and marked a turning point in horticultural iconography. At a time when horticultural texts were predominantly illustrated with woodcuts, Hortus Floridus  captured the imagination of horticulturalists and artists alike with its revolutionary use of copper engravings. This technique allowed its author, Crispijn de Passe the Younger (1589-1670), to capture plants and flowers in exquisite detail. Completed over a four-year period, the Dutch printmaker’s masterwork contains 172 elaborate engravings of garden plants, divided into seasonal sections.

Not surprisingly, Hortus Floridus was a triumphal success, and was published in languages including Latin, Dutch, French and English.

From its elaborate floral covers to its ornate title page, this small book is certainly striking. But, despite its decorative appearance, much of our knowledge surrounding the book’s authorship and its publication history remains a mystery. Believed to be written by Johann Domitzer, Ein new Pflanzbüchlein contains detailed advice on tree maintenance, along with descriptions of these techniques.

Filled with over 200 coloured engraved plates of medical plants, this extraordinary catalogue contains descriptions of plants that were featured in the publications of the Royal Colleges of Physicians of London and Edinburgh. Covering a mix of local and exotic species, the Medical Botany painstakingly outlines the plants’ medical properties and the diseases they treated. Its author, William Woodville (1752-1805), was a respected physician and botanist, and published this great work in monthly parts. 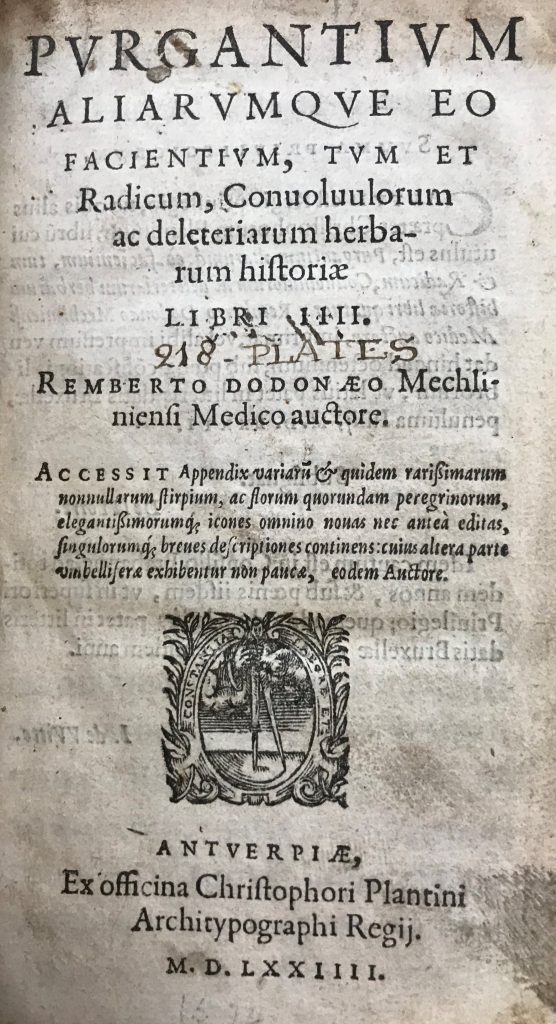 Written by the esteemed Flemish botanist and physician Rembert Dodoens (1517-1585), Purgantium aliarumque… historiae provides a comprehensive guide to the various purgative plants and roots used in herbal medicine. Dodoens’ detailed work contains over 200 woodcut illustrations of plants, including the tropical flowering plant Dracontium and the long-living herbaceous plant Aristolochia  Rotunda, which are both pictured below.

Trattato sulla cognizione is an Italian translation of an earlier French work by the priest and botanist Jean Paul de Rome d’Ardène (1689-1769), and contains information about the cultivation of hyacinths. Over the course of his lifetime, d’Ardène wrote several botanical works, and created a magnificent garden in the south of France, which he filled with rare plants.

In the 18th and 19th centuries, the literary market was flooded with books about ‘the language of flowers’. Works of this genre consisted of long lists of flower species, along with details of their emotional meanings. But, Thomas Miller quickly discovered that most of these works drew upon the same few sources, and was determined to do something about it.

In an effort to re-energise a tired genre, the basket-maker-turned author decided to turn to England’s great writers for inspiration.  The Poetical Language of Flowers draws upon writers including Shakespeare, Spenser and Milton, and explores the meanings they have attributed to flowers, and the emotions these species represent.

The Beauty of Flowers in Field and Wood, John Theodore Barker (1852)

Decorated with ornate floral illustrations,  this eye-catching book contains descriptions of British wild plants, and their moral teachings. Barker’s detailed work aimed to make botany accessible to budding plant-lovers, and is filled with ten intricate hand coloured lithographs. Rather interestingly, The Beauty of Flowers in Field and Wood is bound with an elaborate cloth cover – a common feature of 19th century book binding.

Known as the Father of Amateur Gardening, James Shirley Hibberd (1825-1890) was a prominent figure in the horticultural world. Hibberd was a fellow of the Royal Horticultural Society (RHS), and the editor of three bestselling gardening magazines, including the much-loved Amateur Gardening – a weekly magazine that is still being published today. His striking book, Familiar Garden Flowers,  provides in-depth information about a variety of plants, complete with 40 coloured plates.

The RHS Lindley Library is located at 80 Vincent Square, London. For more information about events and exhibitions at the library, click here